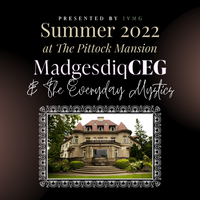 An Elegant Affair at The Pittock Mansion

July 16th, 2022 | 6-10pm | All Ages CEG, the Grand Niece of Henry Pittock, returns to The Pittock Mansion with infinite vibes from MadgesdiqCEG & The Everyday Mystics summer of 2022

History on Portland's Finest House Museum | via www.pittockmansion.org "Henry Pittock (c.1834-1919) was born in London, England but grew up in Pittsburgh, Pennsylvania. In 1853, when Henry was 19, he headed west on the Oregon Trail to seek his fortune. A year later, his future wife Georgiana Burton (c.1845-1918) left Missouri with her family and headed west as well. When Henry and Georgiana arrived in the area, Portland was a frontier “stumptown” competing with Oregon City to become the major trade and industrial center for the region.

Henry found work as a typesetter at The Oregonian at a time when the newspaper industry was financially risky and fiercely competitive. More than 30 newspapers were launched in Portland during this period. On June 20, 1860, Henry and Georgiana married and five months later, he was given ownership of the paper in exchange for back wages. Henry went on to transform The Oregonian into a successful daily newspaper that is still printed today."